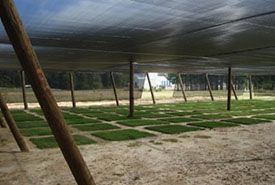 Bermudagrass is one of the most commonly grown turfgrasses in North Carolina. The grass is extremely drought tolerant which makes it a very desirable species especially under new demands for water allocation. However, bermudagrass lacks shade tolerance, a valuable trait for use in smaller residential landscapes where trees are dominant, as is the case in many neighborhoods in NC. A set of nine bermudagrass accessions collected from South Africa have been evaluated for their ability to perform well under low light conditions. The top performers will be used in crosses to develop populations that segregate for shade and cold tolerance among other traits of interest.

Endosperm tissue from diploid plants offers the advantage of being triploid by nature.  Tissue-culture developed triploids are more stable maintaining its ploidy level with reduced segregation issues when compared to sterile triploids developed through artificial hybridization. The objective of this project is to develop a protocol to generate sterile triploids in otherwise recalcitrant grasses where we aim to introduce morphological and physiological variations for breeding purposes. 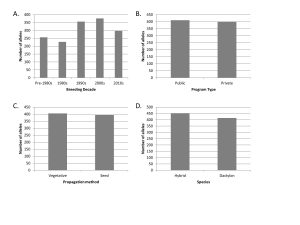 The objective of this study was to analyze levels of allelic diversity at gene and population levels in 85 bermudagrass (Cynodon spp. L. C. Rich) cultivars released for turf use between 1950 and 2016. Thirty-seven primer pairs were used to determine whether allelic diversity has changed through this time period. Cultivars were grouped according to decade of release, program type, propagation method, and species.   Our study demonstrated that, up to the 2000s decade, modern plant breeding has not resulted in a significant decline in bermudagrass genetic diversity, and that the history of interspecific hybridization and germplasm collection in the genus has helped increase diversity over time.